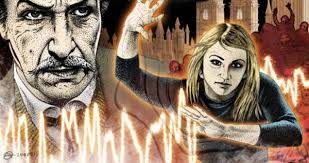 This six-part BBC radio drama stars Peter Cushing and Vincent Prince, two of the most famous horror film stars of the 1950s and 60s. The story centres around the discovery, on a remote Scottish island, of a community of 'human mutants' capable of telepathy. A plan is in place to use them to control the British Government. Two friends Curtis Lark (Vincent Price) and Hugh Baxter (Peter Cushing) join forces to combat the mutants. Aliens in the Mind is based on a story by Robert Holmes, at the time the foremost Doctor Who script editor.


Island Genesis 1/6 The death of a man on the remote Scottish island of Luig sparks a sinister discovery.
Hurried Exodus 2/6 Cornelius and Lark try to get Flora off the island of mutants. Starring Peter Cushing.
Unexpected Visitations 3/6 Curtis and Lock return to London continue their investigation of Flora's powers.
Official Intercessions 4/6 The authorities want to conceal Flora's presence, but how long can she fend them off?
Genetic Revelation 5/6 There's a colony of mutants in London, and the only person who could fight them is dead.
Final Tribulations 6/6 An MP discovers that he is a mutant being manipulated by an unidentified Controller.

Aliens in the Mind by Golden Classics on Mixcloud

Part of the Entertainment Radio 2020