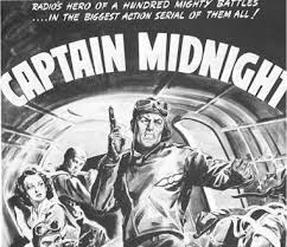 Radio origins Sponsored by the Skelly Oil Company, the Captain Midnight radio program was the creation of radio scripters Wilfred G. Moore and Robert M. Burtt, who had previously scored a success for Skelly with their boy pilot adventure serial The Air Adventures of Jimmie Allen.
Developed at the Blackett, Sample and Hummert advertising agency in Chicago, Captain Midnight began as a syndicated show in 1938, airing through the spring of 1940 on a few Midwest stations, including Chicago's WGN. In 1940, Ovaltine, a product of The Wander Company, took over sponsorship. With Pierre Andre as announcer, the series was then heard nationally on the Mutual Radio Network where it remained until 1942. It moved to the Merchandise Mart and the NBC Blue Network in September 1942. When the U.S. Government broke up the NBC Red and Blue Networks, Ovaltine moved the series back to Mutual, beginning September 1945, where it remained until December 1949.
PremiseThe title character, originally Captain Jim "Red" Albright, was a World War I U.S. Army pilot. His Captain Midnight code name was given by a general who sent him on a high-risk mission from which he returned at the stroke of 12. When the show began in 1938, Albright was a private aviator who helped people, but his situation changed in 1940. When the show was taken over by Ovaltine, the origin story explained how Albright was recruited to head the Secret Squadron, an aviation-oriented paramilitary organization fighting sabotage and espionage during the period prior to the United States' entry into World War II. The Secret Squadron acted both within and outside the United States.
When the United States was attacked at Pearl Harbor, which curiously was foreshadowed in the program, the show shifted the Secret Squadron's duties to fight the more unconventional aspects of the war. Besides the stock villain, Ivan Shark, the war years introduced Axis villains Baron von Karp, Admiral Himakito and von Schrecker. The Secret Squadron wartime activities were usually outside the continental United States, with adventures in Europe, South America, the Pacific, and continental Asia. War related subject matter included the theft of an experimental Flying Wing aircraft, radar coupled antiaircraft guns, jet aircraft and other weapons.
After the war, some of the newer villains used war surplus equipment to carry out their activities. Secret Squadron activities shifted to contending with criminals as well as spies. The action continued to operate internationally, with adventures in South America and Africa as well as within the United States.
The show was extremely popular, with an audience in the millions. Just under half the listeners were adult, and it was a favorite of WWII U.S Army Air Corps (U.S. Air Force) crews when they were stationed in the U.S. Radio premiums offered by the series (usually marked with Midnight's personal symbol of a winged clock with the hands pointing to midnight) included decoders. These Code-O-Graphs were used by listeners to decipher encrypted messages previewing the next day's episode, usually broadcast once a week. Other premiums included rings, telescopes, and WWII items. (The broadcast messages were encrypted with relatively trivial monoalphabetic substitution ciphers with word division.)
The scripts depicted women who were treated as equals, not just characters waiting to be rescued. Both Joyce Ryan of the Secret Squadron and Fury Shark, daughter of villain Ivan Shark, pulled their own weight in the adventures. Joyce went on commando raids and became involved in aerial dogfights during World War II.
Characters​