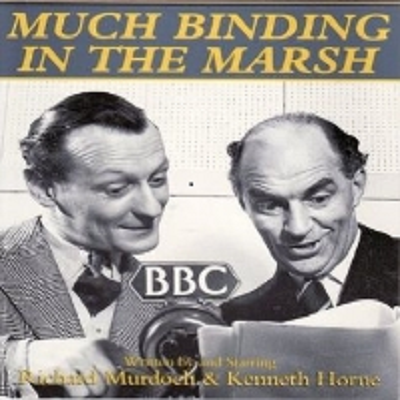 Much-Binding-in-the-Marsh was a comedy show broadcast from 1944 to 1954, firstly by BBC radio and subsequently Radio Luxembourg. It starred Kenneth Horne and Richard Murdoch as senior staff in a fictional RAF station battling red tape and wartime inconvenience. Over the years the station turned to non-combatant operations, became a country club ("the proposed membership drive has been cancelled as it is far cheaper to give everyone a bus ticket") and finally a newspaper, The Weekly Bind.
The programme's title may have been inspired by the RAF station at Moreton-in-Marsh, Gloucestershire, along with the word "binding", period RAF slang for difficulties or problems accompanied by whining or complaining. One of the most fondly remembered parts of the show was the closing theme tune, with topical lyrics each week referring to the plot of the episode, written and sung by members of the cast.
Other cast members included Sam Costa, Maurice Denham, Maureen Riscoe, Dora Bryan and Nicholas Parsons. Musical interludes were provided by Stanley Black and the Dance Orchestra, and songs from Helen Hill. The cast was occasionally joined by special guests; a prominent example of this was the Hollywood star Alan Ladd. Maurice Denham in particular played an important part in the programme, playing a multitude of roles of varying sex and age. These included Mr Blake the sexton (the name a homage to the fictional detective Sexton Blake), the local vicar, Mrs Dinsdale, young Percy and others.
The show was broadcast on BBC radio from 1944 to 1950 before briefly being cancelled and transferring to Radio Luxembourg between 1950 and 1951, after which it returned to the BBC until its run ended in 1954. In 1970, two of its stars, Murdoch and Costa, appeared on several episodes of Frost on Sunday where they performed more comical lyrics to the theme tune. The show is sometimes said to have popularised the term "Disgusted of Tunbridge Wells" for correspondence to newspapers.