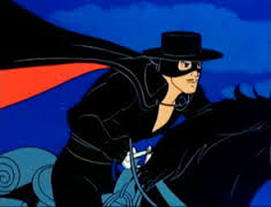 The Adventures Of Zorro

Zorro is a fictional character created in 1919 by New York-based pulp writer Johnston McCulley. The character has been featured in numerous books, films, television series, and other media.

Zorro (Spanish for fox) is the secret identity of Don Diego de la Vega, a nobleman and master living in the Spanish colonial era of California. The character has undergone changes through the years, but the typical image of him is a dashing black-clad masked outlaw who defends the people of the land against tyrannical officials and other villains. Not only is he much too cunning and foxlike for the bumbling authorities to catch, but he delights in publicly humiliating those same foes.

The Adventures of Zorro, a radio drama in 1957, was based on the original Johnston McCulley story The Curse of Capistrano (aka The Mark of Zorro). It was written by Maria Little, directed by Robert M. Light and produced by Mitchell Gertz. This short-lived radio show was a series of short episodes. Only a handful of episodes are known to have survived.


View more on WikiPedia
Part of the Entertainment Radio 2020