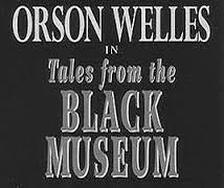 The Black Museum was a 1951 radio crime drama program independently produced by Harry Alan Towers and based on real-life cases from the files of Scotland Yard's Black Museum. Ira Marion was the scriptwriter, and music for the series was composed and conducted by Sidney Torch. Although often mistakenly cited as being produced for the BBC, the series was produced and syndicated commercially by Towers throughout the English speaking world.

Orson Welles was both host and narrator for stories of horror and mystery based on Scotland Yard's collection of murder weapons and various ordinary objects once associated with historical true crime cases. Walking through the museum, Welles would pause at one of the exhibits, and his description of an artifact served as a device to lead into a wryly-narrated dramatised tale of a brutal murder or a vicious crime.

In the United States, the series aired on the Mutual Network between January 1 and December 30, 1952. Beginning May 7, 1953, it was also broadcast over Radio Luxembourg sponsored by the cleaning products Dreft and Mirro. Since the BBC carried no commercials, Radio Luxembourg aired sponsored programs at night to England.

In the United States, a program of similar scope, using many of the same picked cases as The Black Museum, and nearly mirroring its broadcast run was broadcast by NBC called Whitehall 1212. The two shows were different in the respect that while Whitehall 1212 told the story of a case entirely from the point of view of the police starting from the crime scene, The Black Museum was more heavily dramatized and played out scenes of the actual murders and included scenes from the criminal's point of view.
Part of the Entertainment Radio 2020