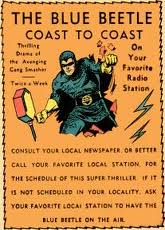 The Blue Beetle had a short career on the radio, between May and September 1940. Motion picture and radio actor Frank Lovejoy was the Blue Beetle for the first 13 episodes, while for the rest of the shows, the voice was provided by a different, uncredited actor.

The Blue Beetle was a young police officer who saw the need for extraordinary crime fighting. He took the task on himself by secretly donning a superhero costume to create fear in the criminals who were to learn to fear the Blue Beetle's wrath. The 13-minute segments were usually only two-parters, so the stories were often simpler than other popular programs, such as the Superman radio serial.


View more on WikiPedia
Part of the Entertainment Radio 2020