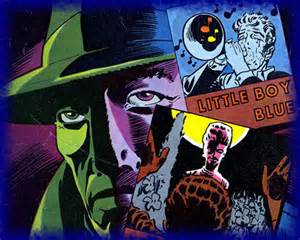 Written and directed by Robert Arthur and David Kogan, the radio series was sponsored by Adams Hats. It began on the Mutual Broadcasting System, December 5, 1943, continuing in many different timeslots until September 16, 1952. The lonely sound of a distant locomotive heralded the arrival of the malevolent narrator (portrayed by Maurice Tarplin), who introduced himself each week in the following manner:

This is the Mysterious Traveler, inviting you to join me on another journey into the strange and terrifying. I hope you will enjoy the trip, that it will thrill you a little and chill you a little. So settle back, get a good grip on your nerves and be comfortable—if you can!
Cast members included Jackson Beck, Lon Clark, Roger DeKoven, Elspeth Eric, Wendell Holmes, Bill Johnstone, Joseph Julian, Jan Miner, Santos Ortega, Bryna Raeburn, Frank Readick, Luis van Rooten, Ann Shepherd, Lawson Zerbe and Bill Zuckert. Sound effects were by Jack Amrhein, Jim Goode, Ron Harper, Walt McDonough and Al Schaffer.

"Behind the Locked Door," a popular, much-requested episode which took place in total darkness, was repeated several times during the years. Two archaeologists discover a century-old wagon train that had been sealed in a cave following a landslide. When their Native American guide is mysteriously and brutally attacked, the two, now lost in the darkness, conclude that the descendants of the wagon train are still living in the cave.

Only 75 of the original 370 Mysterious Traveler episodes still exist. The popularity of the series spawned other supernatural shows, such as The Sealed Book. With scripts by a Mysterious Traveler writer and Tarplin as host-narrator, The Strange Dr. Weird was a nearly identical program