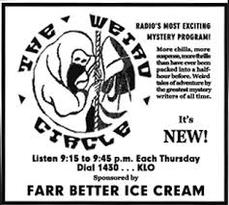 The Weird Circle was a syndicated series produced in New York and licensed by Mutual, and later, NBC's Red network (Digital Deli Too). For two seasons, it cranked out 39 shows (78 total) consisting mostly of radio adaptations of classic horror stories. The production values were adequate, but nothing to get excited about. Noticeably absent was any music. Not using any organ accompaniment helps the show seem less dated now, but it also diminishes the atmosphere that effective music provides a good story, especially if its timeless music of an orchestra or even a piano (as sometimes used in Quiet Please). About the closest Weird Circle got to anything musical was the occasional strumming of piano chords used to signal the transition into another scene. The acting was often overly dramatic.

I've heard a lot of Weird Circle stories and don't recall any of them as real standouts. They were still interesting, but not as thrilling as much of the competition. The sound quality was usually great, but the adaptations of classic stories and actual performances seemed pedestrian (in my personal opinion). There are some collectors who think this series is woefully underrated, but I can't say that I'm one of them. Give them a listen and see what you think.

Interestingly enough, The Weird Circle was syndicated again decades later to independent stations on reel to reel tape. I know this because I found dozens of boxes of the tapes stored at KZSU Stanford in the early 1990s. They were hidden deep within a forgotten basement tunnel that ran under Memorial Auditorium (where the station was located). I ran the series on that station soon thereafter. They were probably originally sent in the 1970s when there was a resurgence of interest in OTR created by The CBS Radio Mystery Theater and Zero Hour. The actual stories sounded like they were the same 1940s recordings, but the introduction and closing segments had a different voice of an older man, and were probably re-recorded to allow a standardized point for commercials to be inserted. The same intro and exit script used in the 1940s was still used in the tapes, where the voice says, "In this cave, by the restless sea, we are met to call from out of past, stories strange and weird. Bell keeper, toll the bell..." What's weird about it is that I found the tapes in a tunnel (cave) located close to the restless sea (Pacific), and they certainly were stories from out of the past, strange and weird. As I shined my flashlight on the yellowed tape labels for the fist time, the campus clock tower could be heard tolling the bell in the distance. It raises the hair on the back of my neck thinking about it. After all, considering those immortal words were first recorded in 1943, that completes a very weird circle.