Voyage of the Scarlet Queen 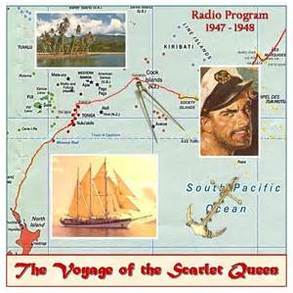 Voyage of the Scarlet Queen was a radio adventure on the high seas, airing on Mutual from 3 July 1947 to 14 February 1948. James Burton produced the scripts by Gil Doud and Robert Tallman. Elliott Lewis starred as Philip Carney, master of the 78-foot ketch Scarlet Queen, with Ed Max as first mate Red Gallagher.

Each episode opens with an entry from the ship's log: "Log entry, the ketch Scarlet Queen, Philip Carney, master. Position -- three degrees, seven minutes north, 104 degrees, two minutes east. Wind, fresh to moderate; sky, fair..." with a similar closing: "Ship secured for the night. Signed, Philip Carney, master." Arriving at an exotic port of call, the captain and first mate would go ashore and immediately run into trouble with local authorities, agents of rival merchants, or desperate women in need of rescue. After some investigation and at least one good fight they would solve the problem, get back on the ship and sail away, Carney and Gallagher sharing a laugh and a drink at the wheel before the captain's closing log entry.

Technically the show was among the better radio productions of the time, employing realistic sound effects and sailing terminology, well paced stories and colorfully detailed settings. Most places visited by the Queen are real. Even the map coordinates given by the captain are mostly accurate, following a zigzag course around the South Pacific.

After the show was cancelled, an attempt was made to revive it under a different name. Only the audition show was produced which was not picked up. The new show's title was to be The Log Of The Black Parrot. The cast included Ed Max, Ted Osborne, Lillian Buyeff, Harold Hughes, Jack Kruschen, and Ben Wright. Music was directed by Walter Schumann and composed by Nathan Scott. The audition was produced by the star of Scarlet Queen, Elliot Lewis and directed by Gil Doud. The announcer was Bob Stevenson. It was recorded on May 6, 1950.