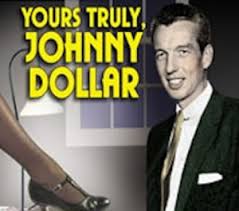 Yours Truly, Johnny Dollar was a radio drama of "the transcribed adventures of the man with the action-packed expense account — America's fabulous freelance insurance investigator." The show aired on CBS Radio from January 14, 1949 to September 30, 1962. There were 811 episodes in the 12-year run, and more than 720 still exist today.

The final episodes of Yours Truly, Johnny Dollar and Suspense, airing on CBS, are often cited as the end of the golden age of radio. The last episode of Johnny Dollar, "The Tip-Off Matter", ended at 6:35 p.m. Eastern Time on September 30, 1962, followed immediately by the final broadcast of Suspense.

Although network radio drama returned to the airwaves — in ABC's Theater Five (1964-65), and CBS Radio Mystery Theater (1974-82) — these were more experimental "drama workshop" shows, and did not adhere to a continuing format or leading character. Mainstream radio drama, as pioneered in the 1920s, died with Johnny Dollar in 1962.